Two women dead, 3 other people in hospital after train collides with car 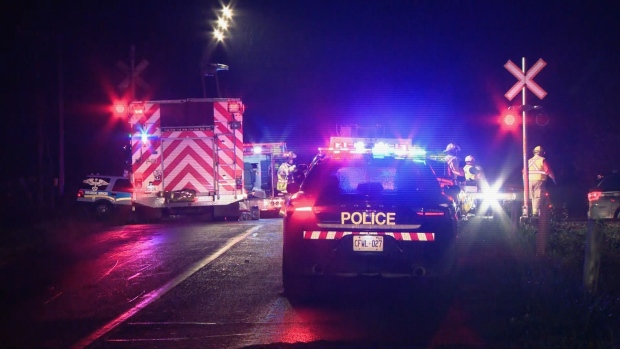 Two women are dead and three other people remain in hospital with serious injuries after a car carrying five people collided with a train north of Toronto late Thursday night.

The collision happened on 5th Line of New Tecumseth in Simcoe County, west of Newmarket.

Emergency crews were called to the scene shortly after 11 p.m. to try help the occupants of the four-door car, who ranged in age from 19 to 28.

One female passenger was pronounced dead at the scene. A male driver and three other women were transported to a trauma centre in Toronto with serious injuries.

Ontario Provincial Police said Friday that one of the women who was transported to hospital has since died of her injuries.

Police are not identifying the women, aged 19 and 24, until they have notified their families.

It is not yet clear how the vehicle ended up on the tracks as a train was coming, or whether the car was at a rail crossing.

“The OPP Technical Traffic Collision Investigators attended the scene last night and commenced their investigation,” OPP said in a release. “No charges have been laid at this time as the investigation is ongoing to determine the cause.”