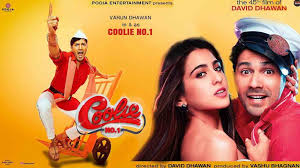 The ongoing coronavirus pandemic has made various Bollywood biggies take the digital route. A lot of big Bollywood films including Gulabo Sitabo, Shakuntala Devi, etc have been released online and others like Laxmmi Bomb, Bhuj, etc are all set to premiere soon. And the latest reports suggest that Varun Dhawan and Sara Ali Khan‘s film, Coolie No.1 might become the latest addition to the list. Directed by David Dhawan, the film is one of the most-talked-about releases of which was to hit the theatres this year but with digital becoming the new normal, the film might also head towards a OTT platform. According to the latest reports, the filmmakers have been approached by a top OTT platform and there is buzz that Coolie No. 1 will enter the digital territory on the occasion of Diwali 2020. The final call is yet to be made by the makers and no official confirmation about the same has been made yet.

Meanwhile, trade analyst Sohail Khan tweeted, “#CoolieNo1 to release on @PrimeVideoIN !! The streaming giant will announce many bollywood films, regional movies and release dates of many web series including the much awaited #Mirzapur2 very soon.”

Have a look at how fans reacted over the news on social media:

I will definitely watch #CoolieNo1 for my baby and let all those jobless people keep spreading negativity as if #VarunDhawan cares😏. He has been the most loved and unproblematic star in bollywood🔥@Varun_dvn just ignore the haters ,your true fans are always there for you 💝. pic.twitter.com/PUA32pFnjd

Varun and Sara had finished shooting for Coolie No. 1 in Goa just before the lockdown. They bonded well during the shoot and used to entertain the fans with many BTS videos and photos. When Sara wrapped up the shoot of the film, she shared a  bunch of photos with the cast and crew and thanked them for the experience. She wrote,  “And that’s a wrap on Coolie No 1. Thank you Varun Dhawan for being the best and coolest coolie. No one better to have helped carry my ‘baggage’ (pun intended), carry me through what I couldn’t carry off, and stop me from getting carried away almost all the time. Will miss irritating you constantly”

Coolie No. 1 is a remake of 1995 comedy film of the same name that starred Govinda and Karisma Kapoor. Ir was originally directed by David Dhawan and he is helming Varun-Sara’s film as well. It also stars comedians Paresh Rawal, Rajpal Yadav, and Johnny Lever in important roles.