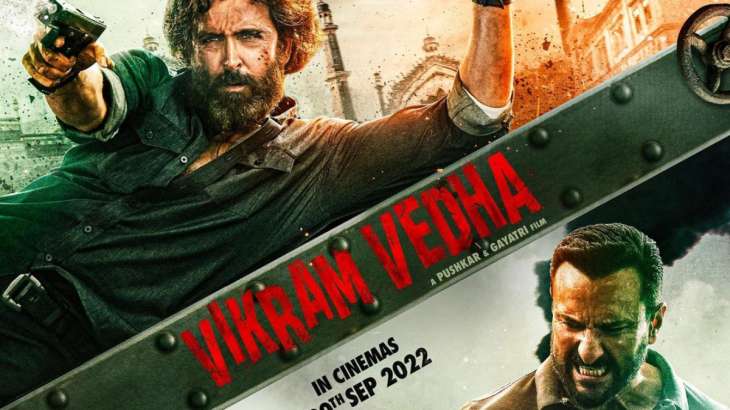 Vikram Vedha Box Office Collection Day 5: Hrithik Roshan and Saif Ali Khan’s action film has been doing decent business at the domestic box office after releasing on September 30. There was huge anticipation riding on the movie ahead of the big screen release but the box office figures tell a different story. Vikram Vedha did Rs 36.94 crore collections in the first weekend and trade analysts have suggested that it is underperforming as far as expectations are concerned. Now, the collections of the film are dropping given the weekend is over. Going ahead, Vikarm Vedha will look to capitalise on the Dussehra holiday on October 5 to pose a decent total in the first week.

On Monday and Tuesday, Vikram Vedha’s collections dropped in the range of 45-45 percent. A lesser drop would have meant that it would be posing a good first-week total. However, that could not happen. Now, all eyes will be on how much crowd it can pull on Dussehra. Given Wednesday is a holiday, good collections may provide the much-needed boost to its first week total and Vikram Vedha might be looking at a Rs 60 crore collection in the first seven days.

Meanwhile, Vikram Vedha has been trending strongly in the overseas market. It was released worldwide in over 100 countries, making it one of the widest openings for a Bollywood film. Besides India, the film was released in territories where Bollywood films normally release day-and-date, including North America, UK, the Middle East and Australia and New Zealand. Furthermore, it opened across 22 countries in Europe and 27 countries in Africa and Latin America, including Japan, Russia, Panama and Peru, all non-traditional territories for Bollywood.

As per trade analyst Taran Adarsh, Vikram Vedha has managed to pull in the audience in the overseas market, which has given a boost to its overall business. Till Monday, it had earned USD 2.94 million, roughly Rs 24.20 crore, in the markets outside India.