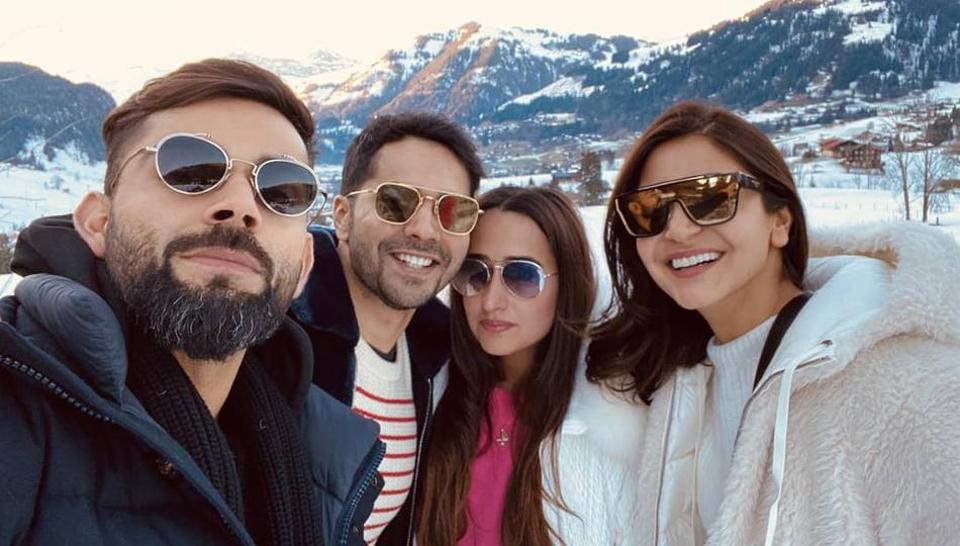 Virat Kohli-Anushka Sharma bump into Varun Dhawan, girlfriend Natasha in Switzerland, Bhuvan Bam says ‘Why did you go to hills? Delhi is freezing’

Anushka Sharma and Virat Kohli met Varun Dhawan and Natasha Dalal while vacationing in Switzerland and gave a sneak peek into their union on Instagram.

Switzerland seems to have emerged as the get-together spot for many Bollywood celebrities who continue to bump into each other amid the snow-clad mountains. Varun Dhawan, who is vacationing with his girlfriend Natasha Dalal, happened to meet his Sui Dhaaga co-star Anushka Sharma and her cricketer husband Virat Kohli in the Alps.

Giving a sneak-peek into their union, Varun shared a group photo from Switzerland on his Instagram account and wrote, “mountain ke dost @natashadalal88 @virat.kohli @anushkasharma.” Anushka posted the same picture on her account and captioned it, “Hello frands! @varundvn @natashadalal88.”

While Virat is on the left in black and Anushka is on the right in white, Varun and Natasha are seen standing between them, as they all come together for a group picture. Anushka’s post got nearly 13 lakh ‘likes’ within a few hours, including one from actor Priyanka Chopra. Comedian Bhuvan Bam commented on the post, “Why did you go the hills? Delhi is freezing right now! Idhar aa jaate. Chole bhature bhi kha lete sab! (You should have come here. We all could have savoured some chole bhature as well.”

A day before, Varun and Natasha had met Kareena Kapoor who is vacationing with her husband Saif Ali Khan, son Taimur and sister Karisma Kapoor in the Alps. Karisma had posted a picture from their union on Instagram and captioned it, “See who we met ! @varundvn #holidayseason #snowydays.”

Soon after, Virat and Anushka also announced their arrival in Switzerland as the former shared a few pictures on his Instagram account. While one was a long shot of the couple, another gave a closer look at the two. Virat is seen in black whereas Anushka shines bright in orange in the pictures.

Varun has taken a break from the promotions of his upcoming film, Street Dancer 3D, which also stars Shraddha Kapoor and Prabhudeva. It is a dance film directed by Remo D’Souza and is set to hit theatres on January 24.