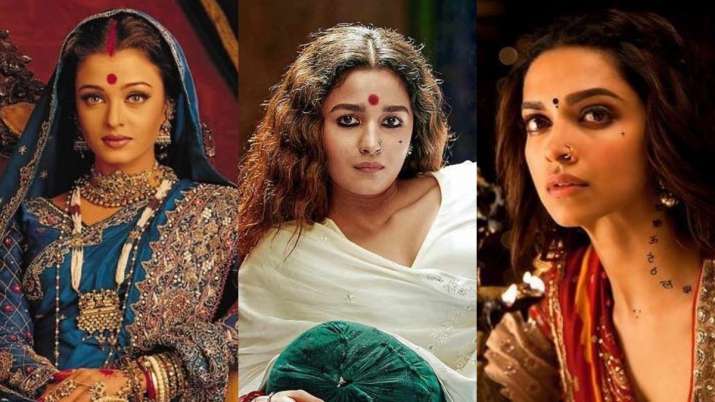 Sanjay Leela Bhansali- the man who is more of an auteur than just a filmmaker– always projects strong women onscreen. Amid his grandiose and magnificence, Bhansali’s women always find their voice in a stifling patriarchal world. Be it his epic love stories like Hum Dil De Chuke Sanam and Goliyon Ki Rasleela Ram Leela or periodic dramas like Padmaavat and Bajirao Mastani, the women are the driving force. Even in a male-dominated star cast, Bhansali’s women characters are never just a part of the story but they are the story. With Alia Bhatt as his latest muse, SLB once again managed to paint another strong rebellious woman character who not just makes everyone bow down to her but commands respect and dignity while not giving up her elegance.

Alia Bhatt’s Gangubai Kathiawadi is a true example of how hard a woman has to fight to break the shackles of patriarchy and misogynistic dominance, just to have their voices heard. Bhansali in the film, loosely based on the true story of Gangubai Harjivandas as documented in the book ‘Mafia Queens of Mumbai’ written by S Hussain Zaidi, makes Alia the voice of representation of 4000 sex workers who have been a victim in one sense or another. Understanding the plight of the women working in Hera Mandi red-light district, Gangubai champions their rights and demands education for their daughters. Though Bhansali introduces Ajay Devgn’s character ‘Bambai Ka Raja’ Rahim Bhai, who acts as the catalyst in her rise to power. The director not once let him overpower Gangubai’s determination and adamance. Bhansali even make it a point to show that his woman character can meet the eyes of the biggest mafias and still can show compassion.

In the end, one is left wondering if it is okay to be heartbroken at her plight or be proud of her choices. This isn’t the first time when Sanjay Leela Bhansali left the audience with mixed emotions about his women characters. In his earlier films like Padmaavat and Bajirao Mastani, Bhansali evoked a feeling of pride in the audience even though the ‘heroines’ met a dreadful fate. In Padmaavat, Deepika oozed grace and splendour without compromising with her strong and powerful personality. She refused to bow down to the dominance and chose her fate herself. On the other hand, Bajirao Mastani witnessed Bhansali’s ‘heroin’ coming out of the societal stereotypes and walking her own path, even when she knows she is not accepted and will always be the ‘other woman.’ Never once did the filmmaker let the audience doubt Deepika’s determination.

Though Sanjay Leela Bhansali has made a name for himself for his grand cinematic representation of the culture and place in his films, his characters always dominated the grandeur- especially women. One of the most celebrated films of SLB– Devdas still warrants respect for the two strong women Paro and Chandramukhi, played by Aishwarya andMadhuri respectively. The two, in their own ways, did not bow down to society’s wishes and continued to dedicate their lives to the man they loved. They even supported each other when the world wanted them to lock horns.

While it would have been easier task to show rhe rise of a woman by pulling the other one, something we see regularly in male dominated action, SLB knows the strength of his central women characters lie in their agency thus serving the audience with brilliance of the above mentioned characters and more. Filmmakers can take a lesson on two on how to make league apart cinema!